The lucky recovery of a shot peregrine falcon

On 24 October 2021 we took our LIFE project a little step further. The importance of collaboration between various wild animal recovery centres with the LIFE LANNER project is fully stated in action C7. On 3 October, the volunteers of the Wild Umbria recovery centre received a report about a wounded peregrine falcon. They luckily recovered it in Magione (PG), in Umbria. X-rays immediately revealed the presence of lead shot in its wing, which was fractured.

However, the recovered animal was not just a common peregrine falcon (Falco peregrinus brookei), widespread in Italy. It was a specimen of the subspecies F. p. calidus, which nests in the Arctic tundra of Northern Europe and Siberia, and sometimes winters in Italy.

The surgical procedure was very delicate, but successful

The falcon was transferred to the San Carlo Veterinary Clinic in Spresiano (TV), directed by Dr. Marco Martini, a veterinary surgeon specializing in birds of prey. Here he was successfully operated for a distal epiphyseal fracture of the left ulna.

Dr. Martini, who has been collaborating with us on the LIFE LANNER project for two years already, together with the managers of Wild Umbria believed that rehabilitation of the animal could be carried out at the rescue centre of Lago di Vico, which has suitable facilities and properly trained staff for the needs of a recovering F. p. calidus.

New additions to the wild falcon recovery (and progress on action C7!)

This new arrival gives us the pleasure of saving an animal, and helping it go back into to the wild. It also allows us to collect feathers from a species that can be easily misidentified as a lanner falcon, and to consolidate our connection with the wildlife rescue centre of a neighbouring region. On October 24, Francesca Vercillo and Pilar De Ferrari of Wild Umbria visited the facilities that LIFE LANNER has already set up for the management of lanners in Vico. The collaboration between rescue centres in the area of potential lanner ​​presence, foreseen by action C7 of LIFE LANNER, is coordinated by the Grosseto headquarters of Istituto Zooprofilattico Sperimentale del Lazio e della Toscana. 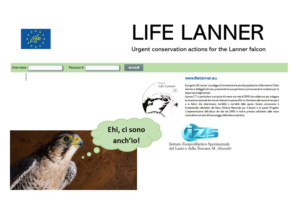 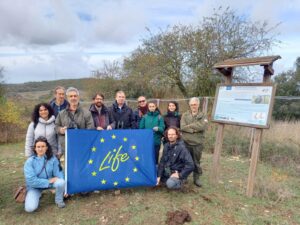